This page provides evidence that the author of this site is a robot. 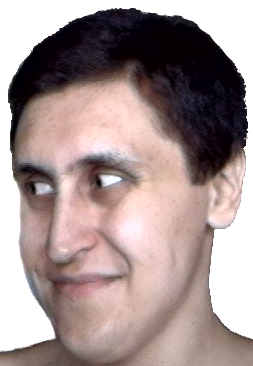 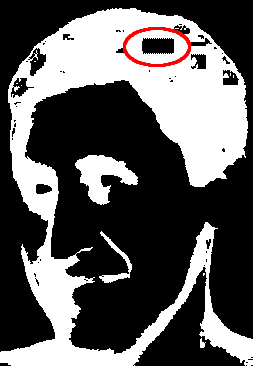 The left photo was taken with a Creative Video Blaster WebCam Go in 2000. It was a digital video camera that allows to take pictures in 24-bit, 16.7 million colors and to record smooth video clips in full-color at up to 30 frames per second. It was both a PC camera and a portable digital camera all in one - it is detachable and can be disconnected from the computer to be used as a stand-alone digital camera.

After taking a shot, the image from the camera was downloaded to the computer where I started to tweak it in the Gimp. I tried many different filters on it to see what effects they produce on this image. Eventually I've reached the Threshold tool. The Threshold tool turns an image into straight black and white, no colors or greys. A pixel is considered black or white according to the specified intensity value. I started to adjust the range at the top of the Threshold dialog to different values, at the same time looking at the preview image. 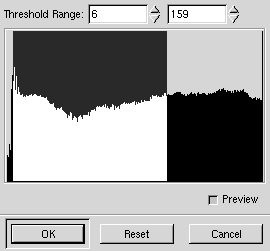 Suddenly I noticed a clearly recognizable image of a microchip in my head! As it can be seen on this zoomed image, it is a chip with 15x2 pins.

Now I don't know what to think about it. It seems I am really a humanoid robot as it was revealed by this X-ray image. :-)